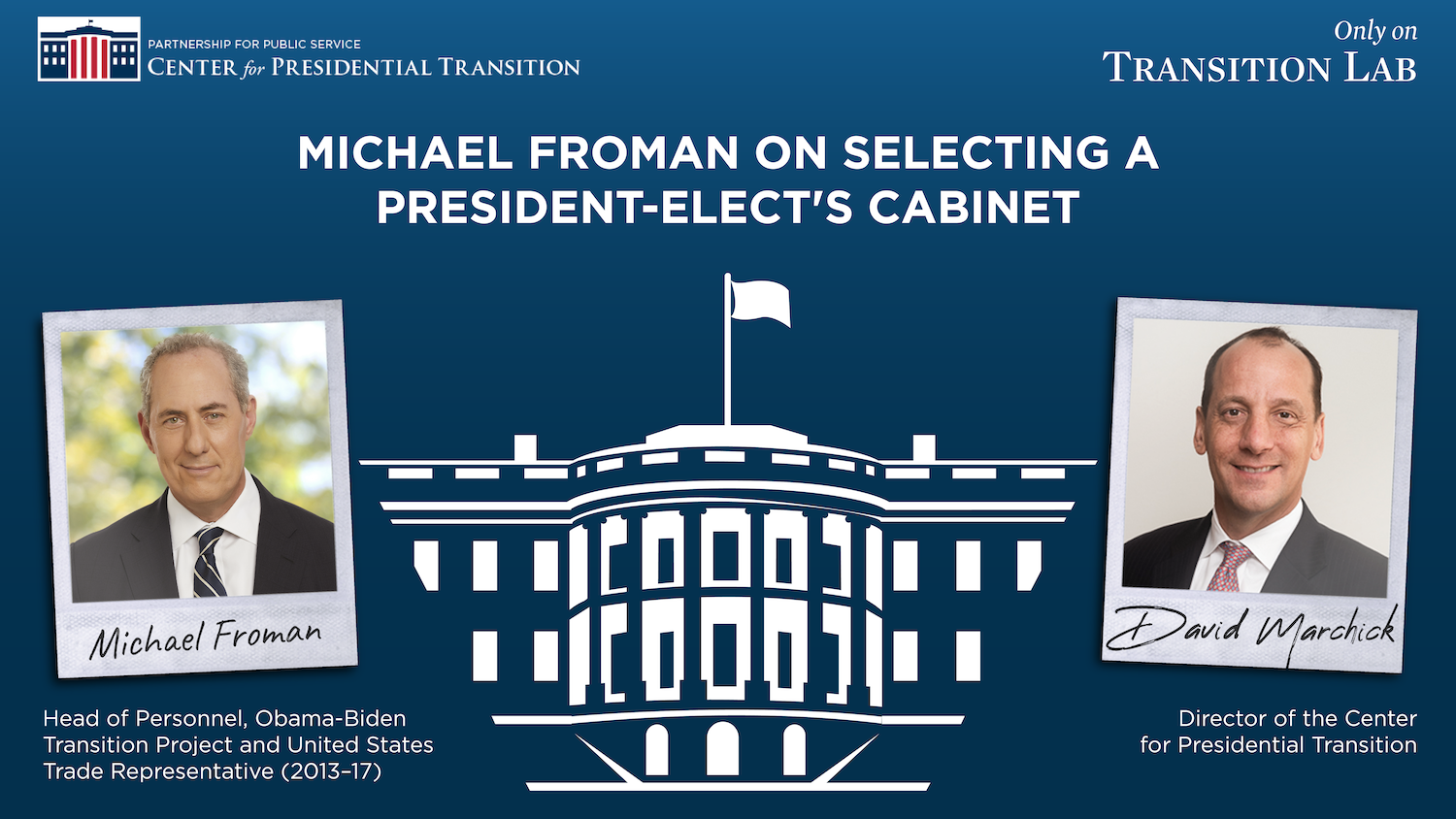 Michael Froman has had an extraordinary career. After serving in the Department of the Treasury under President Clinton, he became the head of personnel for the 2008 Obama-Biden transition team and later served as a White House deputy national security advisor and as the U.S. Trade Representative. In this episode of Transition Lab, host David Marchick asks Froman for an inside look at the world of vetting, selecting and appointing key presidential personnel. They discuss how Froman got involved in transition planning, the lessons his experience holds for future administrations and President Obama’s personnel strategy.

Marchick asked Froman how he got involved in the 2008 Obama-Biden transition.

Froman: “I had known President Obama from [Harvard] Law School. …And when he became senator, a group of us whom he had known either from law school or other places had helped … hire some of his initial staff. …When he decided to run for president, I offered to help him with the transition, in part because I wasn’t planning on going into government and thought that I could make a contribution by helping him with the personnel process.”

Froman: “We’d look at the national security team, the economic team, the domestic policy team, the environment team and come up with lists of names of people who could fill potentially multiple positions. The approach was more to look at teams rather than individual positions. It wasn’t so much having five candidates for one job, but more of having 15 candidates for a handful of jobs. …It was more going out and looking for as many qualified, diverse candidates as possible so that the president would have maximum opportunity to … [put] together the Cabinet that he wanted.”

Froman: “His first decision was not a Cabinet position. It was the position of White House chief of staff and he chose Rahm Emanuel, which also then helped further the process because Rahm was very focused on both the Cabinet and the White House staff. …Because of the global financial crisis, there was a particular momentum for getting decisions around the economic team.”

Marchick asked whether the campaign staff jockeyed for jobs in the administration after the 2008 election.

Froman: “There certainly was an element of that, but people were actually engaged in pretty good behavior. …People [on the] campaign … of course had hoped to get into the administration, but there weren’t a lot of sharp elbows … [President Obama] had not been in Washington for years and years, and he didn’t have a list of a thousand people that he needed jobs for. …He was really quite open to meeting whoever was the the best candidate for the job.”

Marchick asked how successful candidates approached the vetting process for a position in the Obama administration.

Froman: “People who came in and said, ‘I am the greatest expert in this area, I have served the three of the last Democratic administrations and I am clearly the most qualified person for this position. Where do I fill out my employment forms?’ didn’t tend to [do] very well. …The more successful approach was to make clear that you were low maintenance; that you wanted to serve; that there were a variety of positions that you could envisage yourself doing; that you were not insistent on necessarily being the top person in any agency; [and] that you were willing to play whatever role the president-elect felt was appropriate.”

Marchick asked what lessons future administrations should take from the slower rate at which President Obama filled Senate-confirmed positions after his first year in office.

Froman: “The president had made clear he wanted an administration that looked like America, and we were committed to having a diverse Cabinet and sub-Cabinet … So one of our areas of focus was ensuring that the slates [of potential nominees] were as diverse as possible—whether it was racial diversity, ethnic diversity, gender diversity, among other attributes.”

Froman: “When you’re picking a team of Cabinet and sub-Cabinet officials, one should be thinking about who [we are] putting in the pipeline who could succeed the Cabinet, and how do we make sure that they get the support and the training … to fill out their attributes so that they could step up be Cabinet officers as well. The one thing we don’t do terribly well in the federal government compared to some of other organizations, including in the private sector, is [think] about succession planning [and] how to prepare people to step up into the next position.