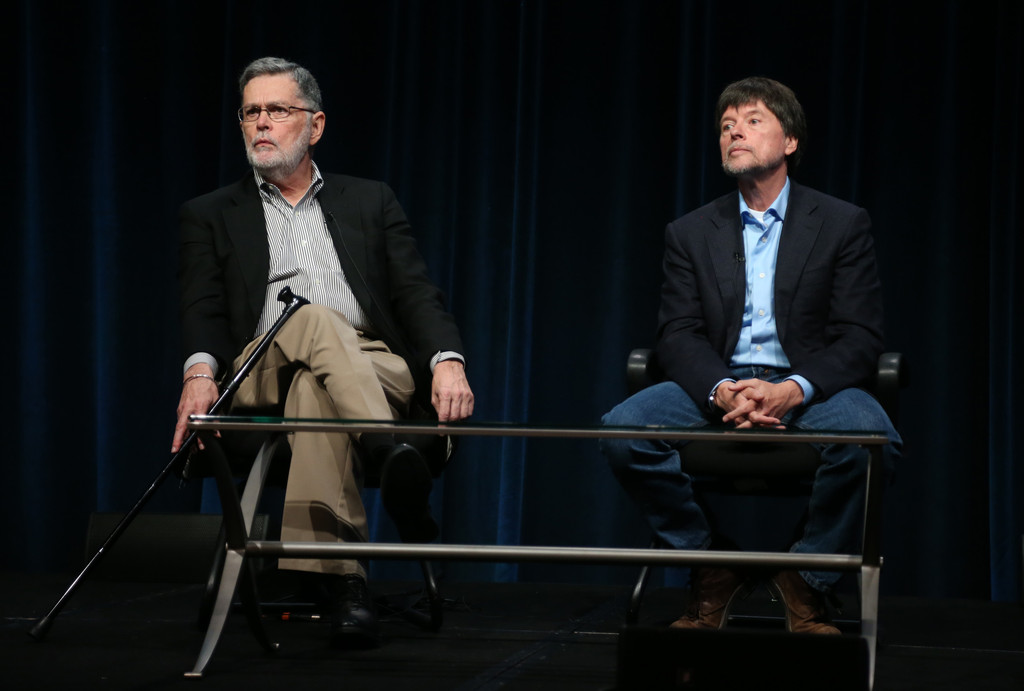 Filmmaker Ken Burns and historian Geoffrey Ward have captured American history by collaborating on documentaries like “The Civil War” and “The Roosevelts.” The two shared stories with Transition Lab about the biggest crises in our nation’s history – from the Civil War to the Great Depression to Vietnam – and how our past informs the present.

Read the highlights and our feature in Axios:

Dave Marchick: Is there a historical corollary to today?

Geoffrey Ward: “I’m always a little uneasy with parallels, but I suppose 1933 is certainly one and 1861 is the other, and I think this is the third.”

Ken Burns: This crisis (pandemic) is on the level of the Second World War, but particularly the Depression and the Civil War. As Lincoln predicted, the danger didn’t come from without, but from within, and now that’s literally medically, epidemiologically true, but also politically and socially true as well. So this is as great a crisis as we’ve had.

Dave Marchick: Based on your read as historians, should we be optimistic, pessimistic or should we be just downright depressed today?

Ken Burns: We have the opportunity here to press a kind of reset button about our values. And so as a student of history and a storyteller, I feel always optimistic, but I am not Pollyannaish. I know that there are great threats and great difficulties at any moment, and we are filled with opportunity as much as we are filled with threat. And it is my fervent hope that we Americans choose the path towards finding a way to have a reset in a very new and spectacular way.

Dave Marchick: Ken, we were talking earlier this week and I was lamenting how presidential transitions are never perfect. They always have problems. And you had a more optimistic view?

Ken Burns: “Let’s step back a little bit and celebrate that since 1797 when George Washington gave up the presidency and John Adams took over, we have had an unbroken succession of presidential administrations. No troops have been alerted. Nobody’s fought and said, ‘No.’ They may have gone unhappily, but they’ve gone…We created a government unbelievably imperfect in its scope and understanding and yet (we’ve) been able to hand off the ball without a single fumble. That’s amazing. Let’s celebrate that.”

Kens Burns reflected on leadership during a time of crisis

Ken Burns: “Both of them (Lincoln and Roosevelt) made huge and glaring mistakes, but a sign of their leadership was their willingness to accept those mistakes, to acknowledge them publicly,  to take the blame, to have the buck stop with them and to move on and try something else…The greatest measure of leadership is, ‘Are you part of the solution or are you part of the problem?”

Ken Burns shared his view on how our history and geography have shaped American ideology.

“He [Lincoln] understood that the Atlantic and the Pacific Ocean, and two relatively benign neighbors North and South, insulated the United States in ways that no other country has ever been insulated…No matter how much the Germans were trying, they weren’t going to cross over and make a Normandy like landing in Montauk…The Japanese were not going to make a beachhead on the West Coast and move in to take over the United States. Unfortunately, the things that it incubates that are positive, like freedom and this kind of curiousness and restlessness and entrepreneurial spirit, have kind of concurrent, darker side…We love more than anything else that kind of division between things. I think as we look across the expanse of American history, people have come in, great leaders have come in and either been able to tame, or they have exacerbated that.”